The Largest Food
Relief the World Had
Ever Seen 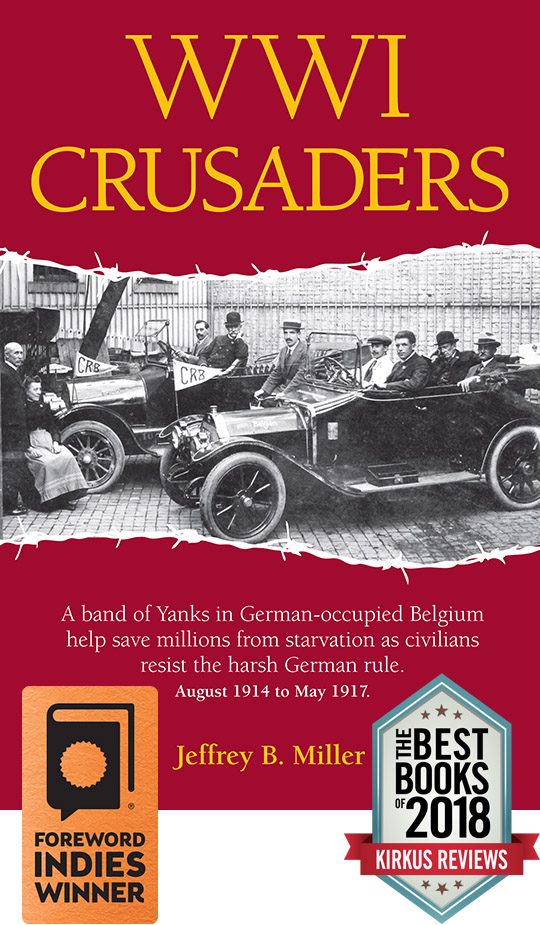 “A tour-de-force history . . . gripping historical
narrative . . . A magnum opus that celebrates
the qualities of compassion, honor, and
humanitarian virtue.”

Kirkus Reviews Starred Review & BEST BOOKS OF 2018 for WWI Crusaders
The Little-known True Story: During World War I (1914-1918), the American-led Commission for Relief in Belgium (CRB) and its Belgian counterpart, the Comite National (CN), did what was thought to be impossible — save from starvation an entire nation that was trapped in the middle of a world war. The CRB and CN initiated, organized, and supervised the largest food relief the world had ever seen. Nearly 10 million Belgians and northern French trapped behind German lines were saved from starvation during four years of the Great War. Young, idealistic Americans volunteered to go into German-occupied territory as CRB delegates to guarantee the imported food would not be taken by the Germans. These humanitarian crusaders were committed to helping the civilians and maintaining strict neutrality as they watched the Belgians suffer under the harsh German regime. The relief efforts faced huge logistical challenges, international intrigues, and internal conflicts between the CRB and CN leaders. It is one of America’s greatest humanitarian efforts that few know of today.

Three Ways to Read the Story

Yanks behind the Lines — This 300-page book is the distillation of more than 10 years of work and my previous two books into a concise and fascinating overview for general readers. Covering August 1914 until May 1917 when the last Americans had to leave Belgium because of America’s April entry into the war, Yanks is structured thematically, providing chapters for all the critical issues while interweaving intriguing personal details about individual Americans and Belgians. (Preorder direct from Rowman and Littlefield or from Amazon.)

Behind the Lines — A Kirkus Best Books of 2014, the book was described as “An excellent history that should catapult Miller to the top tier of popular historians.” (I’m still waiting for the catapult!) It details the war’s chaotic first five months (August-December 1914), the complexities of starting the CRB and the CN, and the initial civilian resistance to the harsh German rule. Order at Amazon.

WWI Crusaders — A Kirkus Best books of 2018, this 762-page book for general readers tells the interlacing stories of German brutality, Belgian resistance, and the American humanitarian crusaders of the CRB. Covering August 1914 to May 1917, Crusaders follows a handful of young CRB delegates, two US diplomats, a 22-year-old Belgian woman, and the publishers of an underground newspaper. A substantial epilogue wraps up all major stories and people through the end of the war and beyond. Order at Amazon.

Behind the Lines PDF

This blog has followed my research, writing, production, marketing and sales of Behind the Lines. Now it follows the same journey but with WWI Crusaders, while reminding readers of why we should not forget World War I and the Commission for Relief in Belgium.