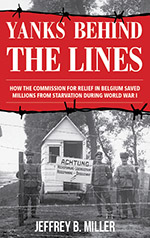 My most recent book about the Commission for Relief in Belgium, Yanks Behind the Lines, was produced (and will be published October 20, 2020) by the great team at the international book publishing company Rowman & Littlefield. Thank you!

My first two books about the Commission for Relief in Belgium — Behind The Lines and WWI Crusaders — were produced by the following people, who definitely made them the best books possible. Thank you!

If you are looking for any of the services these people provide, I hope you will consider hiring them — you won’t be disappointed!

Mark is an editorial consultant with extensive publishing experience. He edits both nonfiction and fiction. He has worked with such distinguished authors as David M. McCullough, Robert Coles,  and Melody Beattie, and edited Johnny Cash’s best-selling memoir, Cash. Mark has headed major publishing imprints at Harper San Francisco, Little, Brown, and Macmillan. Mark read parts of Behind the Lines and made some great suggestions on how to improve it.
Website: http://markchimskyeditorial.com
Email: markchimsky@yahoo.com

Branden is an associate professor of history at Weber State University (WSU) in Utah, where he researches the international history of the United States and especially humanitarian interventions in the era of the First World War. He also specializes in U.S. national security policy and the modern history of the U.S. Navy and Marine Corps.  He earned a Ph.D. in history from the University of California, Berkeley (2009) and an M.A. in national security affairs from the U.S. Naval Postgraduate School (2002); he received prizes for his doctoral dissertation and master’s thesis. Professor Little has published numerous essays and reviews and has spoken regularly at scholarly conferences and to community organizations in the United States and overseas.  He is currently completing a book manuscript titled Band of Crusaders: American Humanitarians and the Remaking of the World, 1914-1964, which examines American-led relief and reconstruction activities during two world wars and the early Cold War. Branden read over Behind the Lines for any historical inaccuracies and wrote the Foreword. He has been a constant and strong supporter of myself, my research, and both of my books.
Website: http://www.weber.edu/History/faculty/brandenlittle.html
Email: jblittle@weber.edu

After graduating from William Penn University, Wesley spent a year as an intern at the Herbert Hoover Presidential Library in West Branch, Iowa. He worked on many projects including writing articles for the Hoover Association magazine and handling the transcription, digitization, and re-housing of collections. Most notably he helped with George Nash’s research on the newly published book written by Herbert Hoover, Freedom  Betrayed. Since then he has done professional freelance research, while completing personal research projects. He helped me with important research at the Herbert Hoover Presidential Library Archives for Behind the Lines.
Email: wesbeck1865@gmail.com

Tom has been in the writing and editing fields for more than twenty-five years, and he earned a master’s degree in English (teaching of writing) from the University of Colorado Denver in 2007. He’s worked for numerous publications, including the Denver Business Journal, Boulder’s Daily Camera, The Flume, and the Dow Jones News Service, winning multiple awards from both the Colorado Press Association and the Colorado Associated Press Editors and Reporters. He was the executive editor on three coffee-table books by Bernie Nagy. He has done a great job of copy editing for both Behind the Lines and WWI Crusaders.
Email: bigmittens1@yahoo.com

Laurie is the owner of Laurie Shields Design, a professional graphic design firm in Denver specializing in multi-page publications of all kinds. She creates print and digital publications that have maximum visual appeal, engage audiences, and produce real-world results. Other services include graphic design for magazines, annual reports, books, brochures, informational guides and product catalogs. She is the art director for AAA Colorado’s EnCompass magazines. Some of her other clients include Gates Corporation, the city of Boulder, and Rose Community Foundation. Laurie helped me create the front covers for Behind the Lines and for WWI Crusaders and numerous other small and large projects.
Website: http://www.laurieshields.com
Email: laurieshields@me.com

Jim Pratt and Dan Pratt of Pratt Brothers Composition (PBC) work with traditional publishers and self-publishers, specializing in cover design, interior design, layout, typesetting, proof reading, and image correcting services. Books that the company has worked on have been honored by the Colorado Independent Publishers Association, the PubWest Annual Design Awards, and the Southwest Book Design & Production Awards. Dan and Jim have done an incredible job for both Behind the Lines and WWI Crusaders.
Website: http://www.prattbrotherscomposition.com/home
Email: info@prattbrotherscomposition.com

Laura has worked for the University Press of Colorado since 1993 and has been in the editorial department since 1994. Her editorial responsibilities have included proofreading and copyediting, and she is well versed in the Chicago Manual of Style. In her spare time she freelances a variety of editorial services. She proofread both Behind the Lines and WWI Crusaders.
Email: laura@upcolorado.com

Doug has been a professional indexer for more than 30 years and has more than 1,600 titles indexed to his credit. He enjoys working for university presses across the country and indexing in the social sciences, but will not specialize in any given fields, believing that indexing is a skill that can be applied successfully to any well-written book. He has both bachelor’s and master’s degrees in history from Arizona State University and was an early participant in its Editing and Publishing Procedures program. Doug did the indexing for WWI Crusaders.
Email: douglaseaston@comcast.net

And, finally, outside the realm of creating the book, but critical to the book’s success, is:

Based in Northern Colorado, Crown Point Solutions specializes in interactive marketing and web design. Their approach is goal-oriented and they like to blend the creative and technical aspects. Mike previously worked at Hewlett-Packard and National Technological University (NTU). Seth also worked at NTU as well as Fujitsu New Zealand and Empowering Youth in Cambodia. Mike and Seth did a great job taking my crude ideas and converting them into a stylish website. They continue to update the site as things change.
Website: http://www.crownpointsolutions.com
Email: sales@crownpointsolutions.com